This is why we MUST stop bump shaming pregnant women

This is why we MUST stop bump shaming pregnant women

“You’re so tiny, are you sure he’s growing?”

“OMG you’re massive, are you sure it’s not twins?”

“Are you eating enough?”

Believe it or not, these are just some of the insensitive things people say to pregnant women on the daily, and honestly? We’ve really had enough. At no other time in a woman’s life is it appropriate to comment negatively on her body shape and yet, during pregnancy, it seems we’re fair game.

What if we told you that bumps come in ALL shapes and sizes?!

It’s as though the moment it’s revealed a woman is carrying a bun in her oven, it becomes open slather for any Tom, Dick or Karen to comment on her body shape or size, or to question whether she’s really looking after her unborn bairn well enough. We haven’t even got to birthing the child yet, and we’re being judged for not ‘getting it right’! What?

Gold Coast fitness-fanatic and midwife Hannah Polites was met with a barrage of abusive comments after posting a photo to Instagram of her blossoming body in its third trimester.

So, to combat this ridiculous shaming of women whilst they are at the most vulnerable stage of their lives, we called for your baby bump pictures as proof that every woman is different and boy, did you answer.

Hundreds of our amazing Babyology readers not only sent us photos of their pregnant bellies, but also shared with us the incredible things complete strangers have said to them about their bodies.

So come with us as we celebrate the unique shapes and sizes mums-to-be come in when pregnant. 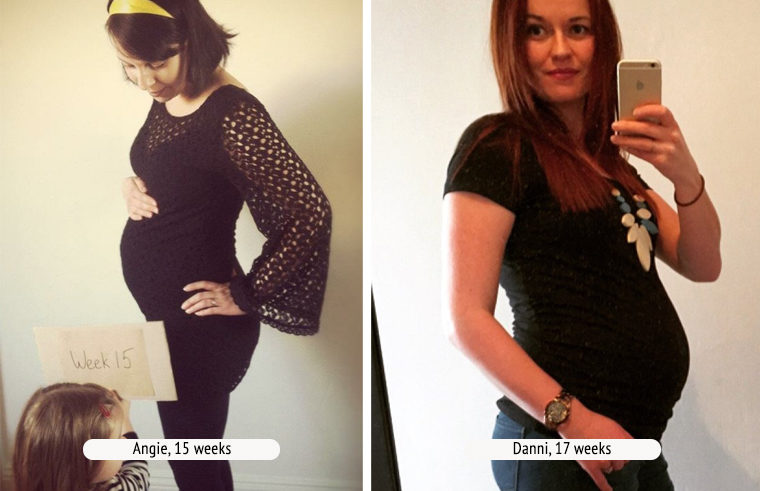 While Angie was constantly told she was ‘big’, Danni’s shamers got a little more specific, declaring “OH MY GOD! Only 17 weeks?! You’re huge!! My bump was that size when I was 30 weeks pregnant!” Good for you, Sally. *eyeroll* “People asked where it was!!” says Ashley W. “Under clothes, my bump was barely visible and it wasn’t until six months people noticed. I had only smiles and received lovely comments when my bump popped.” While Ashley B says the main observation of her bump was, “Omg, you’re so big and you’ve still got so long to go. Let’s hope you don’t get much bigger.” Both of these beautiful ladies are at 20 weeks during their first pregnancy, proving that every bump is perfect! People wondered about Michelle’s belly: “You sure you haven’t just eaten too much? Where’s the baby? You’re so small!” when she was around halfway through her pregnancy. Um, we think Michelle knows the difference between a food baby and a real one, but thanks. #duh Both of these lovely bumps are normal, and beautiful. 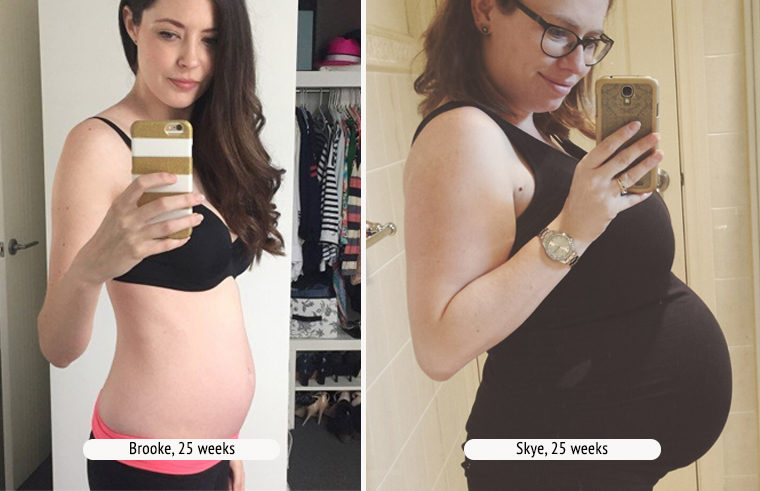 Skye was constantly told “Gosh you are ALL baby!” and “Are you sure there’s only one in there?” which she admits was “just as hurtful as ‘too small!’” Whilst Brooke says, “I always get told how small or tiny I am, and constantly get asked ‘Where is your bump?!’ And ‘I hate people like you’.” How mean. Andria was constantly told, “That I looked like I’d pop any day. I’d never make it to my due date,” while Julie reminisces about how small she felt: “I was pushing out my stomach to appear bigger for this photo (haha!) but I measured small the whole way through – you couldn’t tell from behind that I was pregnant and my obstetrician repeatedly requested growth scans during the final two months as I physically measured small. At this point I was measuring 24 weeks even though I was actually 32 weeks pregnant. I gave birth at 39 weeks and to their surprise she was over 8lb and 52cm long!” Katherine’s most-asked question was, “Are you having twins?” while Janine was regularly told, “That I was HUGE!” Note that these gorgeous ladies are just one week apart in gestation. What a difference, huh? But still, Tegan recalls, “People said I was too small. I am 6 foot tall and I have a long torso therefore there was more room in my belly for my little man so he didn’t need to stick out so much.” Xandi’s beautiful, blossoming bump looks much bigger than Tegan’s, but this glorious mama-to-be is actually a week behind her, at 37 weeks. Shaiye says, “A lot of people were in awe of my lack of size but the general consensus was a negative opinion. My pregnancy was uncomfortable for me personally because I never showed until the end and I was constantly having to reassure people that I was healthy. Everyone needs to stop body shaming and just step back and appreciate what a beautiful thing it is that their bodies are capable of!” 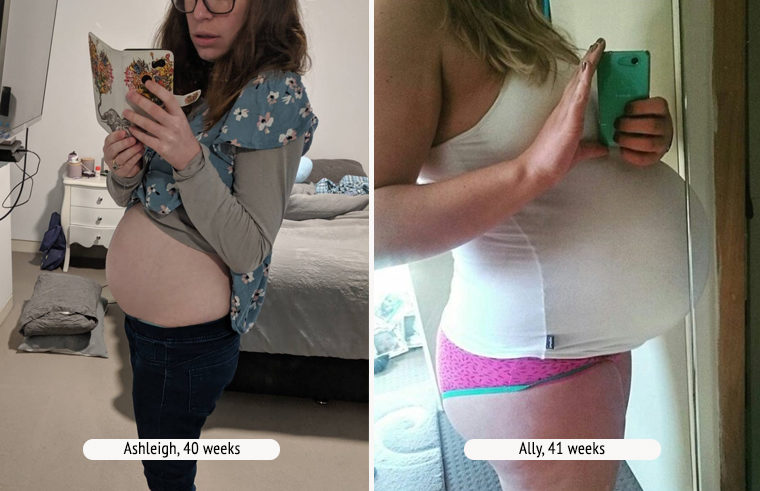 And here we are at full term. Amazing the differences, no? Ashleigh says, “Me at 40 weeks. My daughter was 3.08kg at 40+4”, whilst Ally at 41 week says people told her, “‘That baby will come out walking. You are actually huge. You are definitely going to have a huge kid. I can’t believe the size of you. You know that giant child is going to hurt you so much!’ In the beginning I tried to explain that my hubby is 6ft 5 and I’m 5ft 10. In the end I just gave a very loud sigh and kept going on with my day.”

Rather than commenting on the size or shape of her brand new, ever-changing body, how about we focus on saying helpful things that really might make a difference to a preggy woman’s day. Such as “You are looking beautiful today!” or “You are going to be an amazing mama!” or “What can I do to help you to get ready for your squishy new arrival?”

It turns out that ‘nesting’ in pregnancy is NOT biologically programmed